Disruption and the Changing Face of Space Industry

This will be the 6th edition of this important panel and its focus has changed from questioning the emergence of new business models to embracing and chronicling the new order: LEO Constellations both commercial and government, HTS and its impact on bandwidth pricing, New Space and a new satellite manufacturing paradigm, consumer preferences for video distribution, and the advent of 5G wireless standards that offer the prospect of orders of magnitude service improvements. The proliferation of sensors in space has highlighted the need for on-orbit relay, the tidal wave in Tonga has reemphasized the need for uninterruptible communications to every corner of the planet, and the tragedy in Ukraine has demonstrated the value of transparency in earth observation. This year’s panel will once again bring together technical leaders who are creating the space communications infrastructure moving well beyond the one-size-fits-all GEO world. This year we will continue to address both the technology paradigm shifts and the evolution of space-based services. Join us for another spirited debate about the past, present, and future of the space communications industry. 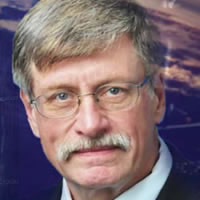 Chris HoeberCFH Engineering, USA, is currently consulting for the communications satellite industry, having retired from SSL in 2015 after an extensive career which included leading the design effort for the first 1300 model Ford Aerospace/SSL/Maxar product line spacecraft, Superbird-A, and managing that program after the contract award. He pioneered the use of electric propulsion for GEO spacecraft Station keeping and was instrumental in identifying threats due to Passive Intermodulation Products (PIMs) and Solar Array Augmented Electromagnetic Discharge as well as developing effective mitigation techniques. His consulting activities have included the design of GEO, LEO and hybrid constellations. At SSL, Chris held a number of executive level positions, including SVP of Engineering & Manufacturing, Program Management & Systems Engineering, and Business Development & Strategy. He was SSL’s first Chief Engineer, and he was CTO when he retired. Chris was responsible for the SSL product development (R&D) program for 26 years, and he is well known in the industry as a student of the industry and thought leader.
He began his career at Hughes Aircraft, where he was responsible for the payload testing of Anik-A and other first generation domestic communications satellites. Chris received Electrical Engineering BS and MS degrees (with distinction) from Cornell University. He is an AIAA Fellow and the recipient of the 2016 AIAA Aerospace Communications Award.

Marco Brancati began his career at Selenia Industrie where he dealt with System Analysis activities for the Electronic Defence Division, prior to moving to the Telespazio Group in 1990.Since mid-2016 Marco has been the Chief Technology & Innovation Officer, and has been responsible for Information Technology as well for whole Telespazio group since June 2021. His prior experience includes: subsystem project manager for the Italsat F1 and SAX satellite missions, Program Manager for the Operations Engineering and O&M activities relevant to the Iridium and Astrolink programs, Key Account Manager for EC and Eumetsat, and management of the Telespazio Studies Unit within the Studies and Innovative Projects Business Unit. He was also responsible for Telespazio Institutional Programs (Sicral 1B and Athena-FIDUS among the others), and he served as the Head of Marketing & Commercial Planning. In September 2008 Marco was appointed Vice President of Telespazio Network & Connectivity Business Line, responsible for the development of all TLC and TV programs and products in the company. In February 2011 he was appointed Senior Vice President of Network & Connectivity Business Unit at the group level. In the same year he completed his Executive Leadership Program at London Imperial College.

James R. Petersen Chief Engineer, pLEO Common Product, Maxar, USA, joined Maxar in 2021 and serves as the Chief Engineer for the development of a Common Bus to support proliferated LEO constellations. This program is focused on developing a flexible and extensible architecture and systems to support a wide range of payload types and missions and has recently been selected for the SDA T1TRK Program. James is also responsible for the internal development of key systems for vertical integration. Prior to this Mr. Petersen worked at Millennium Space Systems as a technical program manager for DoD and NASA missions and was the Chief Engineer on the TETRA-1 GEO mission. James is an experienced mission architect and systems engineer with expertise in qualifying new technologies, processes, and parts for use in space. Mr. Petersen has a background in plasma physics and was a research assistance at UCLA’s Basic Plasma Research Facility working on the Large Plasma Device. He graduated with a BS in Physics from UCLA and received an MS in Astronautical Engineering from USC.

Alessandro Le Pera, R&D Manager and Advanced Payload Manager, Eutelsat, France, joined Eutelsat in 2007 and currently is the R&D Manager and Advanced Payload Manager. He has been following the procurement of several innovative satellites such as W2A (S-band Mission), EB9B (hosting EDRS), E172B (HTS mission employing an MPA), Quantum (flexible Payload including user defined coverages, Beam Hopping and Geo-location), and he is currently in charge of the Digital Processing Section working on the 500 Gbps Konnect VHTS Satellite. In his role of R&D manager, he supports and coordinates Eutelsat participation in R&D activities such as ESA ARTES and Scylight (Secure and Laser communication technology), European Union H2020 projects, and National Agencies specific topics. He is the author of several Satellite Communication Patents, such as a novel Spread-Spectrum approach allowing Antenna Mapping under Interference Scenario for both S/C Antennas during IOT and Ground Antenna ESVA and a novel approach for Capacity Increase by selective interference mitigation (currently object of an ESA study). Before working at Eutelsat, he spent almost ten years at Thales Alenia Space Italy in the Turin plant (Rosetta project AIT) and the Rome plant (Galileo, Koreasat-5 De-hop/Re-hop Transponder, and other Military Satellite Communication systems).

Glyn Thomas, Payload Lead Engineer Airbus Defense and Space, has the role of lead engineer for the key Airbus program: Enhanced Mobile Broadband and Very High Throughput Satellites. This program includes the development of a new generation of digital processors, active antennas, preparation for future MILSATCOM missions and the extension of the E300 NEO platform to higher power. Glyn is also responsible for the Payload Product Engineering Group.
Glyn is a senior expert in flexible, processed, and HTS payloads, and is using this skill to coordinate an end-to-end approach to the design, development, and specification of future flexible high throughput payloads. Glyn was the deputy chief engineer for Airbus’ payload equipment division from 2010 to 2014. He previously managed research and development and he generated a number of key patents in the field of flexible payloads. Prior to this, Glyn worked in both Systems Engineering and Microwave Design roles on the RADARSAT 2 Synthetic Aperture Radar. He graduated from St. Andrews University with a degree in Theoretical Physics and he also holds an MS in Microwave Solid State Physics.

Rich Pang, VP, Corporate Development Telesat Government Solutions, Telesat, USA, is an industry expert in the development and execution of government strategy, products and services. He is a retired military officer with 21 years of space operations experience dealing with missile warning and defense, space control, satellite command and control, launch and early orbit testing, and collision avoidance and EMI analyses. He has a strong background in personnel training and evaluation, personnel and resource management, operational testing and evaluation, and space systems acquisition. Rich’s prior experience includes responsibility for assessing global government and institutional markets, and meeting customer needs at SES Networks. At SES Government Solutions, he was responsible for multiple hosted payload programs: the Commercially Hosted InfraRed Payload (CHIRP), the Wide Area Augmentation System (WAAS), and the Global Observations of the Limb and Disk (GOLD). In May 2010, Mr. Pang retired from the United States Air Force as a Lieutenant Colonel. In his last assignment, he served as the Director of Operations at the Program Executive Office for Environmental Satellites. Mr. Pang earned his commission as a Distinguished Graduate through the Air Force Reserve Officer Training Corps program in June 1989. He earned a BS Degree in Aeronautical and Astronautical Engineering from the University of Washington in Seattle, Washington, and a MBA Degree from San Jose State University in San Jose, California.